Vunder Conflicts and Adaptations. Estonian Art of the Soviet Era (1940–1991)

This exhibition represents one possible approach to the Estonian art of the second half of the 20th century, when it was characterised mainly by conflicts with and adaptations to the new political order established after World War II. The way Soviet authorities understood the role of art and artists in society was radically different from the attitudes which shaped art in the pre-war Estonian Republic. At the end of the 1940s and at the beginning of the 1950s, the strict canon of Stalinist socialist realism prevailed in the Soviet Union, according to which artists had to mediate ideological messages from the Communist Party in a realist manner. In the second half of the 1950s, Soviet society gradually became more liberal, and the Party’s demands on art became less stringent, but official prescripts to Soviet culture persisted until the 1980s.

Despite the rather clear-cut framework, Soviet Estonian art is made up of various, often diametrically opposed trends and phenomena. There is no one single history of Estonian art in the second half of the 20th century; there are many possible approaches, and dozens of different exhibitions could be compiled of the art of that period.

“Conflicts and Adaptations” certainly does not cover everything that happened in Estonian art during half a century, but it attempts to show as many sides of it as possible. Each exhibition hall can be viewed as both a separate small exhibition and as part of a bigger (although inevitably incomplete) whole. The exhibition does not draw a clear line between “official” and “unofficial” art, as these two existed simultaneously, and were often more or less interrelated. The focal point of the exposition in each hall is, nevertheless, different: displays in some halls are reminiscent of Soviet-time exhibitions, while others present works that were never publicly displayed during the Soviet years.

The exhibition follows changes in the relationship between art and the surrounding environment: from intense and painful to more peaceful, from attempting to rise above the environment to establishing contact with it. The strategies of withdrawing from everyday life and the models of confrontation that are evident in art are always contingent upon the environment. In order to recall, introduce and explicate the Soviet era and its peculiarities, an archival passageway runs through the whole exposition, with photos, films and texts hopefully facilitating a better understanding of the art and culture of the time. This is not an overview of Soviet Estonian history, but rather a collection of highlighted pieces of information, which create links to the contents, the mood and the visual plane of the works of art displayed.

In addition, some works created in the 1990s and 2000s that look back on the Soviet era have been displayed at the beginning and at the end of the exposition. They prove that there are multiple ways of remembering history and art history, and that there is no one single correct way of doing this. Our understanding of the past is always shaped by our current point of view and the historical location. 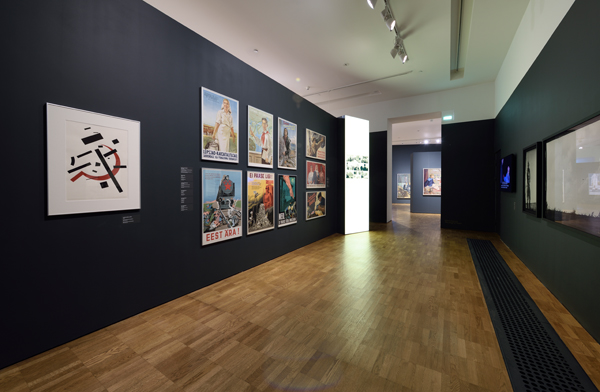