Vunder Conductors of Colour. Music and Modernity in Estonian Art

From the first song festival through the Singing Revolution and beyond, music has played a fundamental role in Estonian history, culture and identity. But if every bird has its own song, as the Estonian saying goes, what of the artist? What is the role of the painter in a society of “singing people”? This exhibition explores such questions, revealing how music and sound –from the ancient strumming of Vanemuine’s golden kannel and chants of regilaulud to the modern clatter of cafés and the abstraction of the Jazz Age – have transformed modern visual culture in Estonia.

In the nineteenth century, musical ability was a refined skill expected of the elite. Playing piano or violin demonstrated cultural sophistication and, in the case of women, readiness for marriage. But by the early twentieth century, music also became intertwined with fame, and artists immortalised musician celebrities in distinguished and glamorous portraiture.

At the same time, the rise of Estonian nationalism sparked the collection and promotion of folk songs, which had maintained cultural traditions among the native peasantry for centuries. Images of kannel and bagpipe players and musical figures from the national epic Kalevipoeg, such as the god of song Vanemuine and even Kalevipoeg himself, tapped into the unifying power of music as a way for Estonians to celebrate and reaffirm the value of their own culture.

In other instances, artists deployed music more metaphorically. Critics called Konrad Mägi a “conductor of colour,” who blended brilliant colours harmoniously “with just the flick of a baton”. In other words, colour was an expressive tool in the artist’s arsenal, in the same way a composer expressed intangible feelings and emotions in musical melodies. Artists thus combined brilliant colours with expansive, panoramic views of nature to suggest symphonic grandeur. Other landscapes could also evoke silence. Whether an eerily still forest bog, or freshly fallen snow on a clear winter’s night, these “quiet” images emphasised the sacred quality of nature.

Music also became associated with death, despair and destruction, not only in images of “Death Tunes,” where Death plays an ominous song before another demise, but also in the melancholic and sickly figures of violin players. By the 1920s, the clashing tones of jazz took the world by storm, inspiring artists to create similar visual dissonance through abstraction of colours, lines and forms, deconstructing the world around them. Images of jazz musicians and their fans at cluttered cabarets and cafes became emblematic of a scandalously new, modern era. 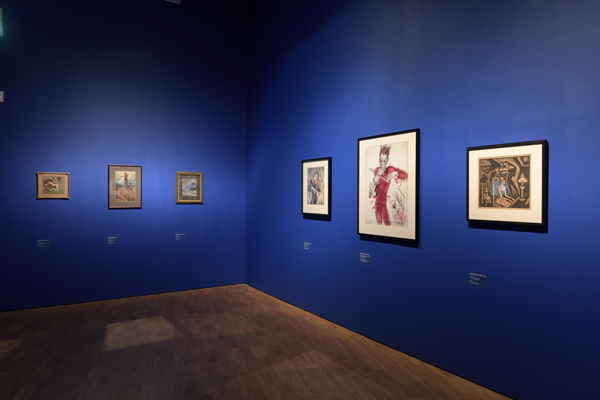